The world is run on innovation. When something is created, it just gets better and better! From day one, we have seen massive changes in bikes! With new technology, improved materials, greater understanding of physics, and the increasing popularity of the sport; massive improvements have been made in bikes! In the following, we will take a look at some of the most popular road bikes, and what has been done to increase their potential over the years, as well as some of the first bikes ever made!

Origins of the Bicycle 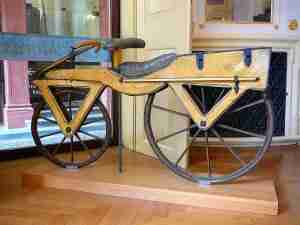 With a widely debated beginning, the first ever recorded 2 wheeled, man powered transport, was a ‘running machine’ made by a German inventor (named Drais) in 1817. The bike was sat on, and propelled by using your legs, as if running. Drais invented the bike in hope to create an alternative to horses, as 1816 brought a drought which lead to the death and starvation of many horses. Drais’ design consisted of a predominately wooden frame, Iron wheels, and brass bushings, and weighed around 22kg. This design caught the attention of a few British cartwrights who released an ‘improved design’ called the ‘velocipede’ in 1818. The velocipede was similar to Drais’ invention, and all following bikes were built on the similar desing/principles.

Years later, in the 1870’s, the High bicycle, or ‘Penny Farthing’ was invented. The bike offered cranks, which allowed the wheel to spin without contact with the floor. The Penny Farthing is a well known design, which was widely accepted and used for a long time after! However, for obvious reasons, the technologies improved a while after. Hence, why we don’t see Lance Armstrong cruising down the roads 70km/h on a Penny Farthing!

Jumping right into the 1900’s, the first road race bikes were designed! In the 1960’s, USA came out with a road bike, which was one of the first of its kind. Right till the late 80’s, where no real changes had been made to bikes, they were still at the same design as the 60’s, with very minor tweaks.

Coming into the 90’s, where road bikes saw a bit of a change! When bike manufacturers saw that the bikes needed to be improved, companies began experimenting with more aggressive geometry to put the rider in a more aerodynamic and powerful position. Such as a raised seat, and lower handlebar height, the rider was forced to be lower, and more evenly weighted over the bike.

Another change that the 90’s brought was clipless pedals! Where the foot is virtually fixed to the pedal. Again, this brought about some more bio-mechanical changes.

Heading towards the late 1990’s, where ‘bike fitters’ would help riders find the bike size which fits the individual, as well as seat height adjustments, handlebar roll/height changing, and other personalization changes to help the individual get the maximum out of their bike!

In 1999 – 2005 Trek came out with their Trek OCLV (Optimum Compaction Low Void). This bike won Lance Armstrong his first Tour de France in 1999. This road bike was one of the first great carbon fibre bikes, which sold like no other! Throughout the next 10 years, bikes were slowly tweaked, shaped, modified, and lots of research conducted to bring us the Specialized McLaren S-Works Venge in 2011! This bike held one of the most aero-dynamic frames, most durable carbon designs, a sleek look, and an extremely light weight build! All together creating a well known and loved bike which is still used by many of todays riders!

The Future of Road Bikes Throughout history, we see lots of changes coming, and they are still presenting themselves through bikes today! Now we see electronic gear shifting, wireless pedometers, cadence sensors, and weights we thought were impossible! What will the future bring? Companies such as Specialized, Trek, Giant, and many others, are today working on frame geometry and materials to increase comfort, control, and an all round better bike!

See about some of the latest mountain bikes by clicking here! Want to know some hacks to improve the quality of your ride? Click here to have a read!